Waaay back in 2013 my husband heard a story about the street vendor who invented cronuts on NPR. He told me about it and the two of us became obsessed.

It was a while ago, so I apologize if I have any of this mixed up. A man invented something wonderful that was a cross between a croissant and a donut…a cronut. He sold them in New York City for $5 each with a limit of 2 per person. He started selling them at 5am lasting for only one hour. Everyday there were crazy lines down the street.

The dough is croissant pastry. you should have seen the mastery at work (and the astonishing amount of butter), when he made that!

You form it into a donut shape, leaving room for the lemon custard filling.

Deep fry it and fill it with cold custard and put the chocolate frosting on top.

Eating them was an experience unlike any other! The texture is insanely nice. The hot dough and cold custard balance each other perfectly.

You have to eat them when they’re almost too hot to hold so they don’t seem greasy.

The frosting is ganache. He makes it by melting Scharfenberger 79 % dark chocolate in a dish over boiling water. He stirs in heavy cream and lets it cool.

The very dark chocolate contrasts with the sweet custard beautifully.

The whole thing melts in your mouth. It’s perfect harmony!

We both ate 2 and then feel in bed and died.

Damn they were good. 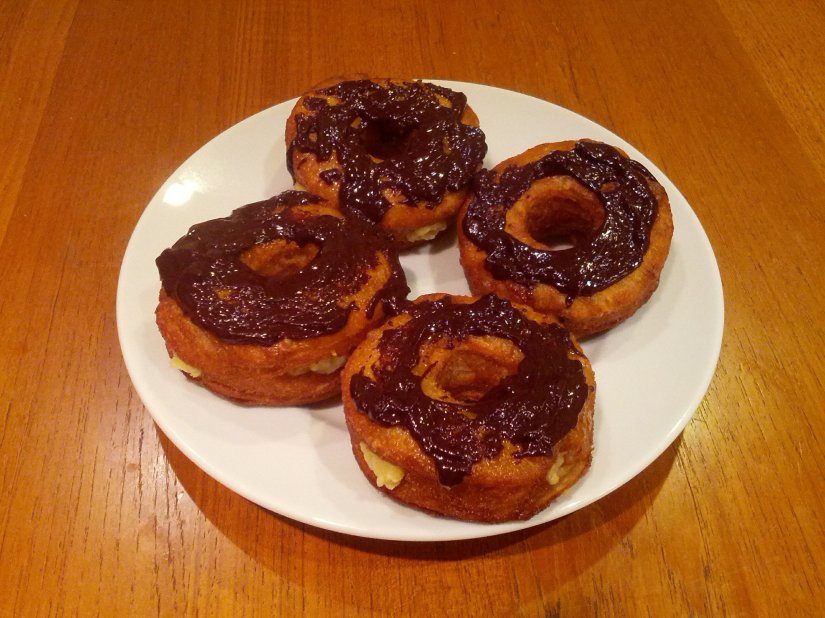 lately i’ve been having fun going to the movies alone. in the past i would have never done that. i would have expected it to make me really anxious. i buy a reserved seat on the aisle (i have to be on the aisle…so i can make a quick get away! lol). it’s a long way to the theaters from the front of the movie plex. i launched myself along to the theater. sometimes i went with the boot on, for my Achilles tendinitis and then i could really move. who would have guessed? 🙂

i like going alone because if the movie is bugging me i can wander around and get a refill on my giant soda, or primp and preen in the bathroom. if i really hate it, i can get up and leave! i don’t do that too often, but i have a few times and it’s fab not to worry about what somebody else wants! the seats at the theater (there’s only one i will go to…it’s close, i know my way around there and there is lots of handicapped parking!) best of all are the seats. they’re like nice recliners, more comfy than my furniture at home. the seats go back and a foot rest comes up. there are cup holders for your giant soda.

today i went out to lunch alone. that was fun too. i had red bean mochi for dessert and my husband wasn’t there to look disapprovingly at me. lol i can take as long as i want and i can look at my phone the whole time, if i feel like it. i don’t have to make conversation, which is sometimes awesome, but today i just didn’t feel like talking. i got there just before the lunch rush, so i got a booth all to myself. i had ramen (real japanese ramen, not the abomination in the plastic wrapper.) they make it with five different broths, you choose one. my favorites are shoyu ramen and miso ramen. it comes with a big piece of pork and a runny egg. i ask them not to give me those. ugh. there are still green onions, weird but tasty mushrooms, fresh corn, lots of noodles and broth. the broth is so go i eat most of that before i even start on the noodles, which are usually my main reason for ordering dishes like this. it was expensive, but entirely worth it. i’m a regular there now! the sushi chef plays bob marley allll the time. i’ve never been in there when he wasn’t playing it. i love that!

i always go to coffee on my own because my huz hates starbucks and only drinks the espresso he makes. i’m not so snooty. right after i get up and get dressed (sometimes i wear my pjs, it’s early) i go to 7-11 and get hazelnut coffee. if they don’t have it brewed, or if it’s been sitting in the container too long, they make me a fresh pot when i ask. i’m really, really a regular there.

there are so many bums around  there, men and women. i’m going to go bankrupt with all the money i give them. i probably shouldn’t, i mean, i don’t especially want those people around, even more so when i first  get up, but my heart goes out to them. i was talking this guy and he told me it had been months since he got to sleep laying down. i imagined that and was horrified. he walks with a cane, too, so i really feel his pain.

everybody is looking for bus fare. ha! they should build a bus stop and right next door, the the cigarette and liquor store, with weed dealers outside next to that. lol. they could have a sign…homeless people with a lot of change welcome here. hahahahah

so, try going places alone, you can make your own choices, independently, doing just what you want! it’s freeing and once you get over feeling weird about it, you’ll really like it, but i don’t thing many people would want to go *everywhere* alone. i sure wouldn’t. but it’s fun when your looking for freedom.

chronic illness folks, you can take as much time as you need to with out worrying about someone else wanting to go faster. you can stop and rest, you can decide it’s too much and just go home. having a handicapped placard makes it soooo much easier! i know some of you just can’t go and i’m sorry about that. i hope this post doesn’t make you feel bad!

have an awesome wednesday!!! ❤

i took this photo at an Asian gelato shop called Sweet Orchid. it’s divine! they have gelato in flavors i’m familiar with like chocolate orange, which might be my favorite, but they also have flavors that i’m not familiar with, like othmanthus, below. all of it is made there at the shop. they have a little case of the cutest most delicious small servings of interesting cheese cake, tiramisu, cookies, unlike any other cookie. very fresh biscotti. they serve espresso and the crowning glory is a little case in the corner that had beautiful, ornate, artful, mind blowing gelato cakes. they’re some absurd price and someday i’m going to buy one and smash my face into it.